Looking for the Secret on the Mat 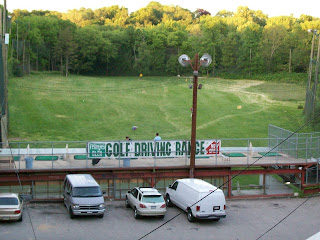 Ben Hogan said that the secret was in dirt. What he meant was the secret to the golf swing was working on it at the practice range. Well, Fishers Glen doesn't have a grass hitting area, it has mats, so I found myself with a medium size bucket of balls this evening looking for my swing. I put my old TaylorMade 200 irons, 300 Series 7-wood and Burner Driver back in the bag to see that might help. I did hit the ball a little bit better, but I am still hitting more of a slight fade as opposed to my normal draw. But I do feel I am getting closer to finding the secret. Tonight I started with hitting eight balls with my Gap Wedge, then 10 each with my 9-, 7-, 5- and 4-irons. I then hit eight balls with my 4-wood, before finishing with the Driver. I hit nine with my TaylorMade Burner and eight with my Wilson Staff Spine. It was not my best practice session, but it was certainly encouraging. I am hoping to play one more practice round--perhaps this Sunday at the Bethlehem Golf Club's Executive Course.
Posted by The Muni Golfer at 10:55 PM 9 comments:

Sunday afternoon I played another practice round at Juniata Golf Club. Trying to take the lesson I learned at the Driving Range Wednesday onto the course, I did hit the ball slightly better, but my game is still far from where I want it to be...or think it should be. It is really difficult to play when you are concentrating so much on swing thoughts each time you stand over the ball. Maybe I have not adjusted to the Wilson Staff equipment I switched to at the end of last season? There is only one way to see if the equipment is what has my game so out-of-whack. I am putting my old TaylorMade Driver, 7-wood, irons and golf ball back into the bag for my final practice round of the year. Depending on how that goes, I'll seriously evaluate if the switch was the best for my game. 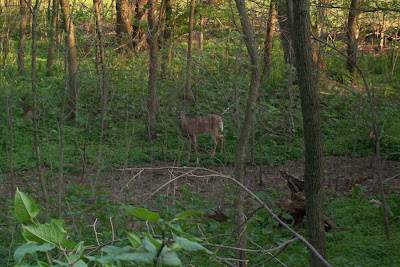 One the Range: A Flash of Inspiration...and Lightning Too

After hitting the ball so poorly on Sunday, I was determined to visit the practice range this week. Although the skies were cloudy and it had rained off-and-on, I believed there would be a brief window this evening that would allow me to hit a small bucket of balls. So I made my way to Fishers Glen for the first time this season. 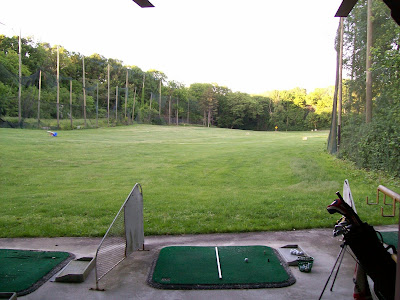 As I expected, the placed was deserted. Undeterred, I picked my usual spot on the lower level--undercover in case it started to rain again--and began my practice. I took my Momentus Power Hitter with me for the first time this season and used to warm up, then attempted to hit some balls with it. And just like Sunday, I hit balls off the heel, and when I didn't do that, worm burners. After about a dozen balls I pulled out my Wilson Staff Spine Driver and hit it just as poorly. It was raining steady at this point and rumbles could be heard. I picked up my pace, hoping in the words of Carl Spackler, "I don't think the heavy stuff's gonna come down for quite a while." 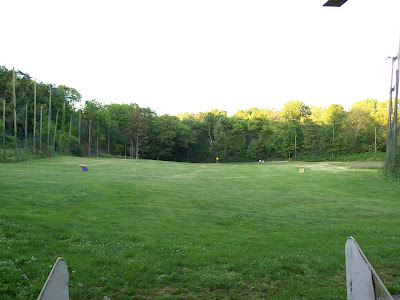 I switched to my new Wilson Staff Fybrid to get a feel for it when I made a startling discovery. I was swinging around my body. My swing has always been more effective when I swing more straight up-and-down. I started hitting the ball more solidly and straighter. Flashes of lightning were now illuminating the sky, so I quickly switched back to my Driver and hit about 8 balls with a more up-and-down swing. Suddenly, I was hitting it solidly , but with a slight fade. As the thunder boomed overhead and rain pelting down now, I decided discretion was the better part of valor and abandoned my spot on the range, leaving a half bucket of balls. As I quickly ran to my car with my bag slung over my shoulder, hail began to come down as well. Maybe I didn't get in as much practice as I wanted, but hopefully I uncovered a key flaw in my early season swing which I can now go about correcting. 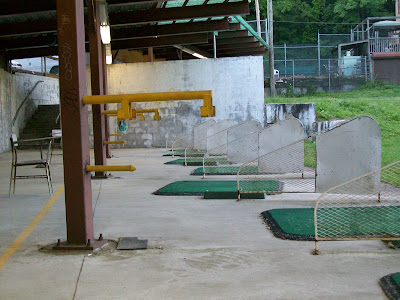 New Edition to the Bag 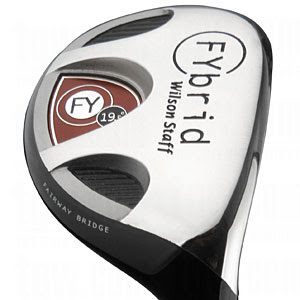 I just picked up a new edition to my golf bag--a Wilson Staff Fybrid. Wilson touts the Fybrid as a bridge clubs that replaces a 2-iron, 2-hybrid and 7-Wood. The club has 19.5 degrees of loft and 41-inches in length, which Wilson says that studies indicate is the optimum loft and length for hitting long shots from the fairway. The club is designed to bridge the gap between fairway woods and hybrids in your club set-up. The club also comes with the UST V-2 hybrid shaft. Two-time Open Champion Padraig Harrington carries a Fybrid 5-Wood and 3-hybrid in his bag. I will probably rotate between this new club and my Wilson Staff FwC 7-Wood.
Posted by The Muni Golfer at 5:58 PM 6 comments:

Trying to shake the winter's rust off my game and get ready for some serious golf this summer, I played my first 18 hole practice round this afternoon at Juniata Golf Club. Temperatures were definitely cooler--the high was 64--in the partly cloudy, windy conditions. Walking 18 holes for the first time was not a problem since I have been walking two nights a week--sometimes three--with my wife. I felt physically fine as I navigated the course. My swing and my game were a different story. Off the tee my game was OK, as I hit 7 out of 11 fairways. But I only 2 out of 18 greens and none of them were on the Par 3s. Where I had my real problems was around the green--hitting chips and pitches. I was awful. Of course, after a five month layoff, you can expect your touch to be a bit off. It just highlights my need to get to the Driving Range on a steady basis to hone my swing and to work on my short game. My best hole of the day came at the 380-Yard, Par 4 9th Hole, which plays over the Tookany Creek and uphill. I didn't hit my best tee shot; it went dead right, but hit some trees and bounced back into the fairway, leaving me 175 yards uphill to the green. I hit my 7-wood onto the green, just 10 feet above the hole. I had a tricky downhill left-to-right slider for my birdie, but two-putted for par.

The course was again in fairly good shape for so early in the season, but last week's rain made for some soft conditions and I found mud on my ball several times on approach shots and chips or pitches. Juniata also continues to undergo a transformation. The side of the hill as you go down from the 7th tee to the fairway has been bulldozed. The new tee at the downhill 12th Hole--which is becoming a 165 to 175-yard Par 3 instead of a 300-yard Par 4--has been graded and seeded. A sign warns those on consider sneaking their tee shot from the new tee: "Do not even think about it." And the around to the left of the 7tee and behind the 16th tee has been bulldozed for what looks like the installation of a new back tee for the 16th. Several new cart paths have also been added around the course. 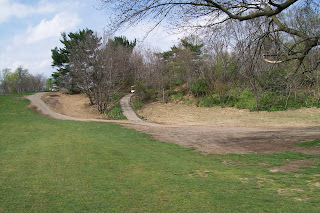 The cartpath leading down from the 7th tee 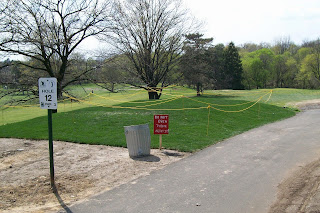 The new tee at the shorten Par 3 12th Hole 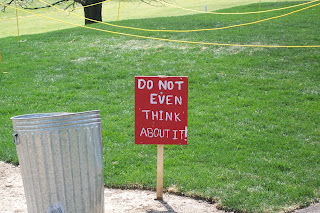 A warning to those who want to try the new tee 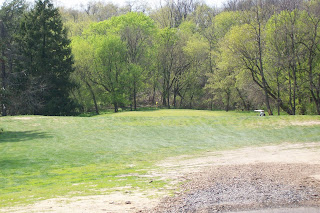 The view of the downhill 12th Hole from the new tee 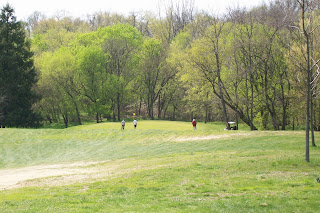 The 12th Hole from the 'temporary' tee box 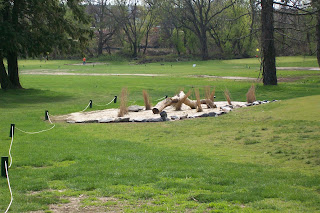 The new waste bunker guards the left of the 12th green 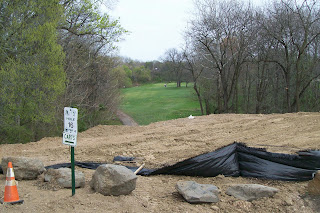 The weather and my schedule finally allowed to hit the links for the first practice round of 2009. I headed over to Juniata Golf Club for the first nine holes of the year. Because of the beautiful weather--sunny skies, 60+ degrees and moderate April winds--the course was a bit crowded and slow. I teamed up on the 1st hole with Frank and his stepson, Tim, who is just starting to learn the game. We had a great time playing together. Also, the walking I have been doing twice a week has helped my physical conditioning as I felt no fatigue, especially in legs, during or after the round. 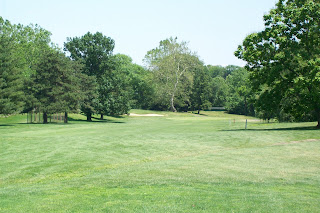 The 4th Hole at Juniata
Overall, with only making it to the driving range once so far this season, I should not be too disappointed with my results today. I played some decent holes, some mediocre holes and some very bad holes. Off the tee, I did well when I didn't use the driver, hitting four out of seven fairways. I especially hot my new Sonartec SS-07 4-wood well. My irons were mixed, but it is only the second I have played with the Wilson Staff Di7s I purchased at the end of last season. I did not, however, hit one green in regulation. My chipping and pitching was mediocre at best, but that is mainly due to the winter's build up of rust. Putting wasn't that far off and I only three-putted one green, while averaging two putts per green. I think with some consistent practice. my game will round into shape rather quickly. 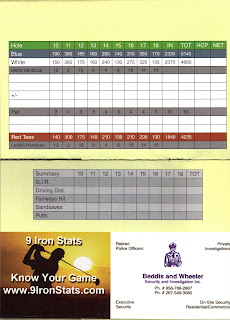 New Juniata Golf Club Scorecard
As for Juniata, the course was in pretty good shape for so early in the season. There were only a few bare patches in the fairways and the greens looked and played pretty well. There was also a lot of evidence of the ongoing work being done at the course. One interesting new wrinkle is the new Juniata scorecard, which is the centerfold of a course yardage book. There is also room to chart your round's stats, such at fairway hit, GIR, sandsaves and putts. 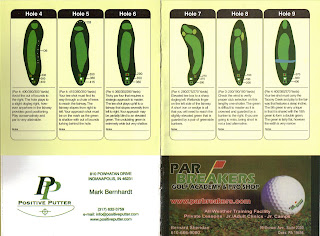