My Year in Review

As the final hours count down on 2008, it is time to look back at my golf year. This past year, I played 23.5 rounds, which included one-and-a-half practice rounds and one incomplete round. I played on 14 difference courses, including four for the first time: Rock Manor, Center Square, Jonathan's Landing and Talamore. I played 422 holes and averaged 93.1 strokes per 18 holes, excluding the practice rounds and incomplete round. I had a score of par or better on 85 of those holes, or 22 percent of the holes I played. I had at least two holes of par or better in every round this year. The most holes of par or better I had in one round was 6 at FDR on July 19 and Oct. 12 at John F. Byrne. I also made six birdies, all on Par 4s: #1 at Rock Manor, #1 at Horsham Valley, #12 at Jonathan's Landing, #14 at Juniata and two at Juniata's 5th Hole. My lowest round of the year was an 87 at Juniata on September 21 and my highest round was a 101 at Talamore on Oct. 17. I also had an 88 at Horsham Valley (Aug. 16) and at Juniata (Sept. 14), as well as a 90 at Center Square on June 26. 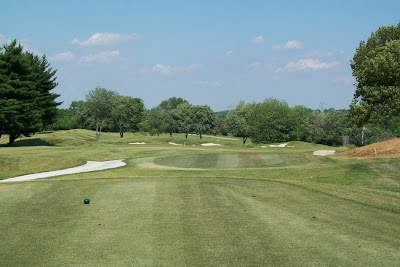 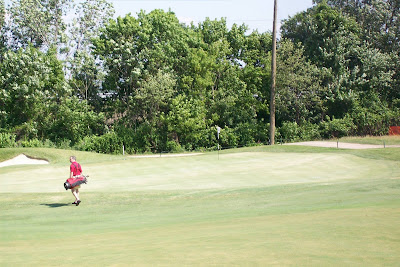 Like most everyone, The Muni Golfer woke up this morning to find that Santa had left several packages under the Christmas Tree. Santa must have gotten my Christmas list, because when I opened my gifts, I found two boxes of Wilson Staff Zip golf balls and a DVD of the golf movie, The Legend of Bagger Vance. I can hardly wait for some good weather to try the golf balls on the course. And I'll be watching one of my favorite golf movies as I start thinking about next season and using those golf balls. Thank you Santa...and Mrs. Claus too!
Posted by The Muni Golfer at 10:57 PM 4 comments:

Happy Holidays from The Muni Golfer! 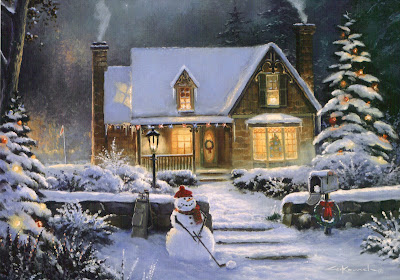 I want to take this opportunity to wish everyone a very Happy and Safe Holiday Season. May you get everything on your holiday wish list and may 2009 be a year of fairways and greens, birdies and pars, and lower handicaps for all!
Posted by The Muni Golfer at 9:52 PM 3 comments:

Like everyone else this time of year, The Muni Golfer has made out his list for jolly Old St. Nick. Among the golf items that I've asked Santa for is a gift card to Dick's Sporting Goods or Golf Galaxy, some Wilson Staff 50/50 or Zip golf balls, a box of Nature Valley Granola Bars (The Muni Golfer's favorite on-course snack) and a DVD of either Legend of Bagger Vance or Tin Cup. The Muni Golfer has been especially good this year--hitting the driving range, counting all my shots, and taking appropriate penalty strokes--so Santa should deliver at least a couple of the things on my list. I can hardly wait until Christmas morning!
Posted by The Muni Golfer at 12:07 AM 4 comments:

During the summer I found myself to be sleeping, but not really resting. My wife also told me that I was beginning to snore louder and louder; to the point where it was beginning to effect her sleep. It may have also effected my golf game because there were often times when I had very little energy towards the end of a round and my concentration on the course wasn't always the greatest. During a routine checkup with my doctor, who happens to specialize in sleep disorders, I mentioned these symptoms. Subsequently, I was tested for, and diagnosed with, sleep apnea. A person with sleep apnea stops breathing during sleep, often hundreds of times during the night, and often for a minute or longer.

According to the American Sleep Apnea Association, "Sleep apnea is very common, as common as adult diabetes, and affects more than twelve million Americans, according to the National Institutes of Health. Risk factors include being male, overweight, and over the age of forty, but sleep apnea can strike anyone at any age, even children. Yet still because of the lack of awareness by the public and healthcare professionals, the vast majority remain undiagnosed and therefore untreated, despite the fact that this serious disorder can have significant consequences. Untreated, sleep apnea can cause high blood pressure and other cardiovascular disease, memory problems, weight gain, impotency, and headaches. Moreover, untreated sleep apnea may be responsible for job impairment and motor vehicle crashes. Fortunately, sleep apnea can be diagnosed and treated."

I am now using a a CPAP or Continuous Positive Airway Pressure machine to help me sleep at night. CPAP, which is one of the most common treatments, works by gently blowing pressurized room air through the airway at a pressure high enough to keep the throat open. This pressurized air acts as a "splint." The pressure is set according to the patient's needs at a level that eliminates the apneas and hypopneas that cause awakenings and sleep fragmentation, according to ASAA. I've used it for two nights now and it takes some getting used to, but hopefully, it will help me get better, healthier rest in the long term.
Posted by The Muni Golfer at 12:57 PM 11 comments: