Working 9 for 5 in Bethlehem

Yesterday, while in Easton, Pa., for a family event, I managed to get a rare nine holes of golf. Because of time constraints, I ventured over to Bethlehem Golf Club's Executive Course. This 9-hole facilty, loctade acoss the street from Bethlehem's wonderful 18-hole course, is a great place to practice and work on your game. It features seven Par 4s and two Par 3s. Holes play uphill, downhill or doglegs, while the greens are small and often elevated. There is a forward tee for playing the first nine and back tee for the back nine. And it only cost $16 on a Saturday afternoon to play as many holes as you want.

My Bethlehem GC Executive Course Scorecard
Considering I have only played 27 holes until yesterday, my game wasn't as rusty as I thought it would be. I hit it faily well off the tee and generally hit my irons crisply. My short game was better than it has been so far this year, but my putting still needs some work as I burned the edge numerous times. One of my big mistakes thoughout the round was failing to take into consideration the distance the ball carries because of the altitude change. I have found that when I play in and around this area, I am usually one club longer minimum. This, and a steady breeze, caused me to overhit a few greens.  What I found interesting was that I made a 5 on all nine holes I played, a feat I didn't think I've ever before accomplished. 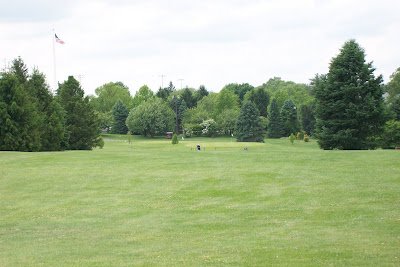 Downhill tee shot at the Second Hole
There was one really neat moment that occured while I was playing.  Through the first four holes, I had a father and son playing in front of me. The son was probably in his early 20s and it was easy to tell he was new to the game.  After waiting on the tee and in the fairway on each shot for them to finish ahead of me, the father told me to play through when I had reached the Fifth Hole, a very short Par 3.  I had heard them tee off while I was on the Fourth Green, but the father told me his son was a beginner and they didn't want to hold me up. I had heard the father pull two tee shots into the woods to the left and exclaim "nice shot" when his son had teed off.  Normally, I would have asked to play with them, but I needed to get back to the family event as soon as possible, so I thanked them, hit a poor tee shot and took two chips to get on the green. As I went to remove the flagstick before putting, I noticed a Maxfli golf ball in the cup. I didn't remove the pin, but walked to the front of the green and yelled back to ask if the son was playing a Maxfli. He yelled back yes and I hollared, "You made a hole-in-one!"  They looked at each other then quickly made their way to the green.  The young man looked in the cup and confirmed it was his ball. His father said it was only his second time playing golf. I congratulated him on his rare achievement before putting out and moving to the next hole. 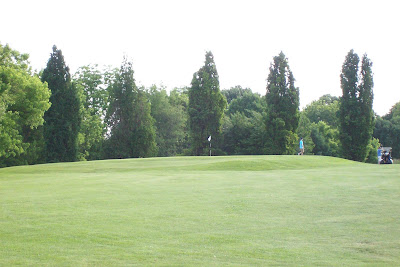 The Par 3 Fifth Hole which was aced
After my round, I stopped by the local Dicks Sporting Goods, which has a really great golf section. I picked up a TaylorMade Burner 5-Wood on sale to match my Driver and 3-Wood. I plan to alternate this 18-degree fairway club with my 17-degree Nickent 3DX DC Utility 2-Hybrid depending on the course and the conditions. 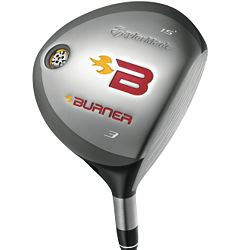 TaylorMade Burner Fairway Wood
I will now be cleaning my clubs and packing them up as this will probably be my last round of golf until July as Mrs. Muni Golfer and I pack our clubhouse in preparation for moving to a new clubhouse later in June. While I'm looking forward to our new clubhouse, I'm not looking forward to the packing, moving and unpacking.  But at least I'll be able to keep playing my favorite courses from my new location.

Weathering My First Full Round of the Season


On an usually cool and very windy Sunday in early May, I ventured out for my first full round of the 2010 season.  Since I have not been able to get to the Driving Range and have done virtually no practicing since early April, I wasn't sure what to expect out of my game.  I had played well in spurts over my first nine holes of the season the previous week, but I wasn't sure if that was just early season luck or what.  I tried to downplay my expectations, but at the same time, I was hoping to build on the five good holes from the previous outing.  I was fortunate to run into a colleague from work on the second hole and we played together through nine holes, which made the front side more enjoyable to play. 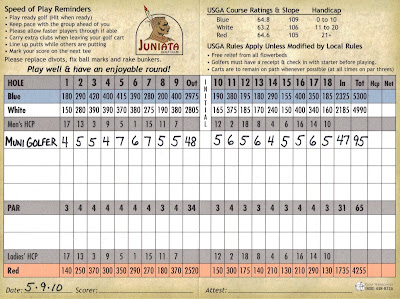 My Scorecard
The strong winds made club selection, as well as shot selection a bit difficult, especially with only nine previous holes played under my belt.  I tried to play for the hard hooks I was hitting last time out with my irons, but that wasn't as much of a problem this time and I probably over-compensated for that swing flaw causing me to hit a few shots dead right. 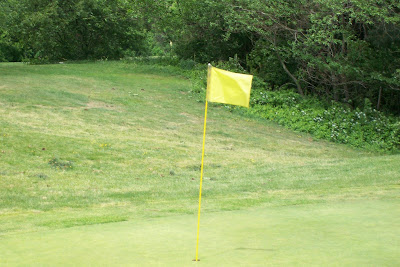 The wind had flagsticks bending on the greens 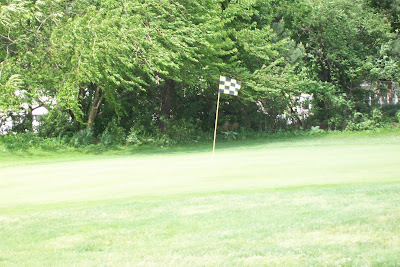 I hit the ball a little better off the tee and with my approach shots, even if they were often affected by the wind.  Where my game, and my scoring, really let me down this week was in the area you would probably most expect it this time of year--the short game.  The lack of touch or feel on my chips and pitches caused me to waste shots, often adding at least a stroke or two to most of the holes I played.  And my putting, while not bad, didn't feel as confident as it had the previous week.  I did make two pars, but I let too many opportuntites go to waste.  This will only be corrected by more playing and practicing, something I feel won't be happening on a consistent basis until the middle of the summer. 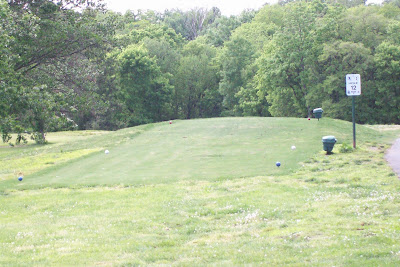 The new tee box at the Twelfth Hole 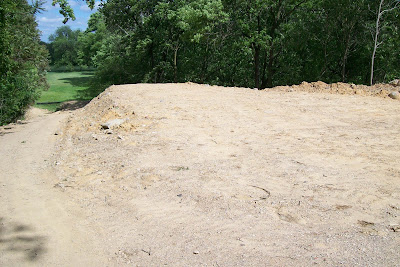 Construction of the new Sixteenth Tee
I am happy with the continuing improvement of Juniata Golf Club.  More cart paths have been added and barriers have been put up along the cart paths around the tee boxes.  The new tee box at the 12th Hole is open and construction looks like it is continuing on the new elevated tee box for the 16th Hole.  And a new, fitting memorial to those who have served in our Armed Forces (below) has been erected outside the ever improving clubhouse. 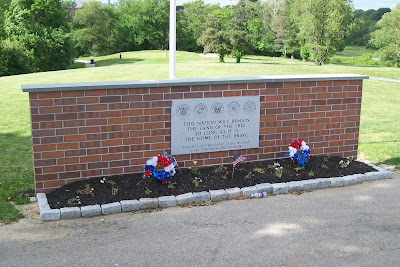 It Felt Divine to Finally Play 9 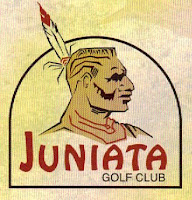 I finally found the opportunity to grab my clubs and hit the links for nine holes this past Sunday. I played the front nine at the ever-improving Juniata Golf Club.  I wasn't sure what to expect out of my game since it had been three weeks since I last made it to the practice range.  I tried to keep my expectations to minimum and focus more on my swing and course managment. All-in-all, the results were a mixed, but probably a bit better than I expected.

After pulling my opening tee shot left on the downhill, Par 3 First Hole, I chipped to the front of the green and two-putted for a bogey.  At the Second Hole, I hit a 5-wood up the right side of the fairway to about 30 yards short of the green, but pulled a sand wedge left. I chipped to about six feet and made my first par of the year. 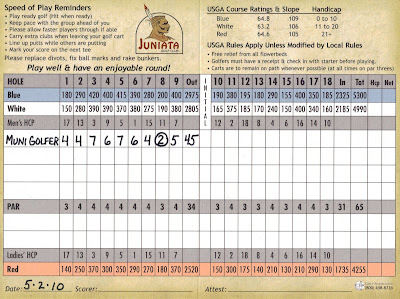 My Scorecard
The next stretch of four holes demonsrated that I need to work on my irons.  I hit the fairway, or was jst off it to the left on each hole, but managed to pull my approach shots severely left.  This resulted in scores of 7, 6, 7 and 6.  The 6 and the Sixth Hole was especially disappointing since I crushed my tee shot down the middle and had only 97 yards left uphill to the green.  But, with the ball below my feet, I skulled my approach over the green.

At the Seventh Hole, I again pulled my tee shot left and thought I had hit the ball into the waste area that runs down the left of the fairway and must be crossed onapproach to the green. But my hybrid off the tee managed to find the left rough instead and I hacked it out onto the green, where I two-putted for another par.  At the Eighth Hole, I again hit my 4-hybrid with a nice draw which landed just short and hopped up on the front portion of the green.  I then nailed a 30-foot right-to-left putt for my first birdie of the year.  At the Ninth Hole, I pulled my tee shot left into the rough, and my approach shot just left of the green and above the hole. I chipped to 10 feet below the hole, then two-putted for a par and a nine hole score of 45. 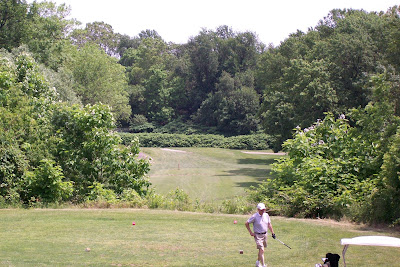 Juniata Golf Club, however, continues to impress. Additional cart paths and other cosmetic changes, as well as very good playing conditions has this course on par with many higher priced courses you could play outside Philadelphia.  I would dare to go so far as say that, with maybe the exception of Island Green, Juniata has to be considered among the top public courses in the City of Philadelphia.  All credit goes to the fine work of the Juniata Golf Foundation.