Stop me if you've heard this one before. During my latest round at The Fairways Golf and Country Club, I shot a really, really good front nine and a really, really bad back nine. It has been the common thread throughout my golf season in 2012. I will shoot a very good or respectable score on the front nine, only to struggle and shoot a higher score--sometimes much higher--score on the back nine. Traditionally, in past seasons, when I have managed to shoot a decent front nine--somewhere in the mid-40s--or even not so good front nine, I have more often than not found a way to turn it into a good or at least decent round on the back nine. Now is it almost the opposite; more often than not, I am finding ways to turn what has the potential to be really great round into a good or fair round. Sometimes I even manage to make it into an unacceptable round.

Sunday's round at The Fairways fall in to the latter category. I opened with my best drive of the year and had a mere pitching wedge for my approach, but I hit it thin and into the water that front the green. A drop, a wedge into the right hand bunker and two putts meant and opening triple bogey. But oh how that changed. I parred the next three holes. Then I made a double bogey at the Fifth Hole, followed by a bogey at the Sixth. Then another par. At the Eight, the number one ranked hole on the course, I again split the fairway. From about 150 yards, I hit a 7-iron to three feet and made birdie. A three-putt and the Ninth left me with an opening 38. Despite two bogeys, a double bogey and a triple bogey, I had set myself up to potentially shoot a round in the 70s or the low 80s at worst.

The back nine started out on the right track, despite a tee shot pushed to the right. I chipped out of trouble, hit a wedge onto the green and lipped a putt for a bogey. Then the Eleventh Hole got me again. I tee shot pulled left behind a tree. I punched a hybrid down the fairway and was in great shape until a poor pitch left me short of the green, followed by a poor chip, followed by a three-putt and a triple bogey. OK, I made triple at the First and still shot 38, no problem. Moving to the Twelfth, a short par 3, I'll get it back. A hooked 8-iron short left, a skulled pitch over the green, a short chip on, a very miss-read put followed by three more putts--another 7. What am I doing? A topped drive at the Thirteenth lead to a double bogey. OK, two short par 3s coming up, I can get this back. No I can't; bogey's at each. Now, swing thoughts--the kiss of death. Eight, seven, seven finished off a back nine 55. Another potentially great round thrown away over the final nine holes. Usually, it is just a hole or two on the back nine that torpedoes me...Sunday it was six.

My next round will again be at The Fairways on Ryder Cup Sunday. Like the USA team, I will be looking for redemption.
Posted by The Muni Golfer at 9:08 AM 23 comments:

Fall Golf in the Valley


The calendar has passed Labor Day and there's no better time to play golf than in the fall. Granted, the leaves can be a pain, hindering searches for golf balls that land off the fairway  and creating obstacles on the putting surface. And there are the putting surfaces themselves, which are generally recovering from being aerated. But cool weather makes for ideal conditions and the courses tend to be less crowded on the weekends, meaning faster rounds, as the casual golfer turns his attention to football. Saturday I teed it up at Neshaminy Valley Golf Club in Buck County. It was a gorgeous day and stiff breeze blew through the course under blue skies. I haven't played Neshaminy Valley in over year, since posting an 87 last August.

My round was pretty unusual. I drove the ball on the Par 4s and 5s, but was awful off the tee on the Par 3s. I played the three Par 5s in one-under, making a par at the Second and Ninth Holes, and a birdie at the Fourteenth. I parred two of the Par 4s. But on the Par 3s, the best I could do was a bogey at the long, 219-yard Sixth Hole. The rest of the Par 3s were either double or triple-bogeys. Again, my short game was the main culprit and is definitely an area I need to work on to improve my game. But despite my troubles with the Par 3s, I was only 6 shorts higher than my 87 last year.

This round also continued my year-long trend of shooting higher on the back nine than the front nine. This the 11th time it has happened in 16 rounds this year. At the end of the season, I need to sit down and evaluate the reasons. In past years, I have usually scored better on the back nine than the front. It is either mental, where I begin to think about my final score, or physical where I am tiring over the second nine holes. I am leaning more towards the former than the latter. 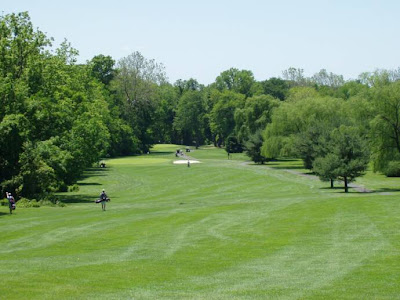 On an equipment note, I had a new Cleveland Launcher 17-degree fairway wood in my bag. It replaced the 17-degree Adams 4-wood that had been in my bag. I had received a $20 gift certificate from Dicks Sporting Goods, and the club was already on sale, so it was a deal I couldn't pass up. Although I only used it a few times off the tee at Neshaminy Valley, I hit it pretty well with really good distance. The real test will be hitting it off the fairway.
Posted by The Muni Golfer at 11:26 PM 46 comments:

It's Better at Bensalem

On the final "official" weekend of summer, I teed it up with a co-worker at Bensalem Township Country Club, located just across the city line. Labor Day weekend is a time I normally playing a round at the Delaware Shore with my cousins, but that outing came back in July this year. I haven't played Bensalem in three years, and coming off my 82 at The Fairways the previous week, I felt pretty good about my game. 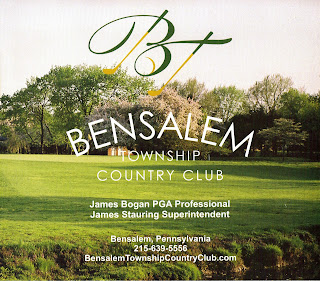 As we waited on the First tee, the starter, Gene, told me Bensalem was in very good shape and that he would put it up against any course in the area. I usually take the starter's course critique with a grain of salt; what do you expect them to tell you, the course is lousy? But in this instance, Gene was pretty accurate in his assessment. Except for a few bumps were the greens are still recovering from aeration, Bensalem was in as good a condition the best courses I've played this season. 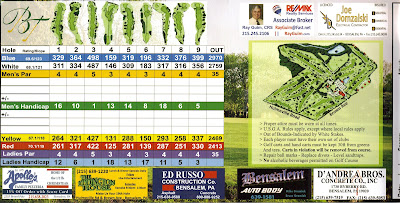 I played well on the front nine, opening with a bogey on the short Par 4 First Hole when my approach with a gap wedge came up a bit short, but I rebounded to par the Second Hole. I made another bogey at the Par 5 Third Hole when I again came up short with a wedge on my third shot. Another par at the Par 3 Fourth Hole had me feeling good, but I ran into some trouble at the Fifth. I hung my tee shot out to the right and under a tree, but then punched an 8-iron left of the green and pitched over. This led to a triple bogey 7. I hung my tee shot out to the right on the next two holes also and made double bogey at each. I hit 4-wood off the tee at the 316-yard Par 4 Eighth Hole and found the fairway, then hit the green with my approach and two-putted for par. But I tried to baby a driver at Ninth, hitting it off the heel and short left, which led to another double bogey and a 46 on the first nine. 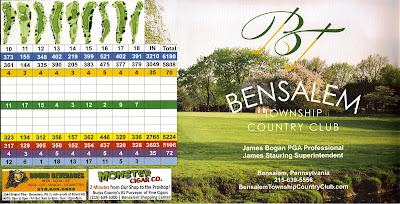 I believe the reason I am hitting the ball right off the tee is on some swing I am dropping my right shoulder just enough to leave the clubface slightly open through the swing. If I can correct that, I feel I will again be able to square the clubface at impact and start hitting the ball straight or with my customary draw on a more consistent basis. 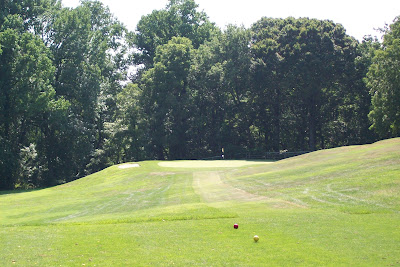 It began to rain as we teed off on the back nine. I made a bogey at the Tenth after finding the right side of the fairway, but again pushed my tee shot well right at the Par 3 Eleventh Hole. Hitting from a grove of trees, I punched it into the bunker, then blasted out and two-putted for a double bogey. I hit my tee shot at the Twelfth in a fairway bunker, but my approach from the bunker with a 7-iron was pulled well left and out-of-bounds. I did make a long putt to only make bogey, but at the Thirteenth, a tee shot pushed right led to an 8 after I took a drop, punched back into the fairway, then slipped as I hit a 4-iron right of the green. The 205-yard Par Fourteenth plays over a ravine and I again hit my tee shot right, which led to a bogey. On the last four holes, I hit perfect tee shots, but couldn't capitalize on any of them, going bogey, bogey, double bogey and bogey to semi-limp home with a 49 and a total of 95 for my round. 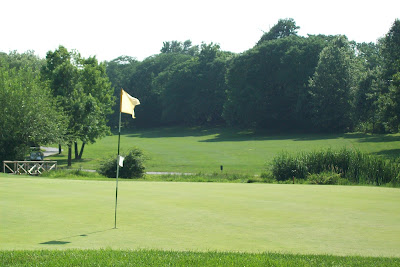 Green at the Eighth Hole

Overall, I was pleased with my round at Bensalem. Even though I did hit some tee shots to the right, I am getting off the tee much better now than earlier in the season. What I really need to work on is my short game: chipping, pitching and putting. My putting is satisfactory, but can always improve. It is an area I plan to concentrate on through the fall and early spring in hopes it will be a strength next season. 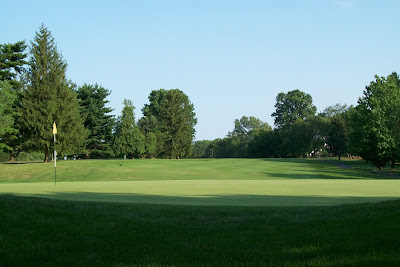 As for my going struggle with tendinitis in my left elbow, the Aleve I take before I play and the brace I wear is helping me get through my round. I am icing my elbow occasionally, but I think I need to do it more between rounds. Also, Mrs. Muni Golfer and I just bought a new treadmill, which I will be using to get myself in better shape, not just for golf, but overall. And being in better shape can only help my golf game as I hopefully will build up better stamina for walking the course.
Posted by The Muni Golfer at 10:29 PM 26 comments: