Another Day in the 80s at The Fairways

After playing on such bad course conditions at Walnut Lane Golf Club a week ago, teeing it up Sunday at The Fairways Golf & Country Club seemed like playing Augusta National. The better course conditions allowed my game to take advantage and post my best round of the season. Even though the greens were as fast as I think I have seen this year and the holes were placed in some devilish positions, I used good course management and played with confidence throughout the 18 holes. 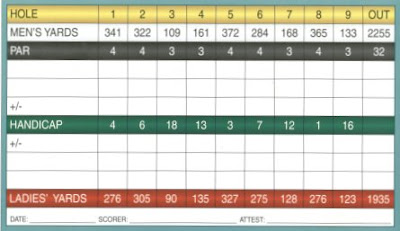 Front Nine at The Fairways

My round started off with pars at two of the first three holes, including sand saves at the First and Third. I also parred the Eighth and Ninth holes to shoot a mere seven over par 39 on the front nine. The only blemish was a double bogey at the 372-yard Fifth Hole, where I made a 10 about a month ago. 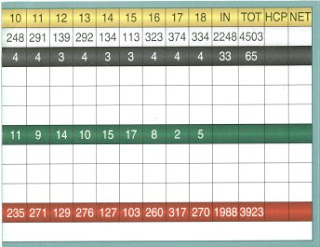 Back Nine at The Fairways

My back nine score, as has been the case all season, was again higher than the front nine. But a 10 over par 43 isn't all that bad when you go out in 39. I opened the back nine with two pars at the Tenth and Eleventh--a hole that has given me fits over the years. But I tripled bogeyed the Par 3 Twelfth Hole when I found sand off the tee, then blasted over the green and three-putted. I played bogey golf the rest of the way in, except for the 374-yard Seventeenth, where I made a double bogey. 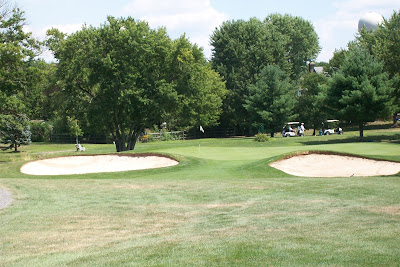 Made an Up-and-Down from the Bunker at the Third

I have now played five rounds at The Fairways this season, with scores of 90, 90, 83, 98 and 82. My average score for the course in 88.6. I have made 3 birdies and 22 pars in those five rounds. Hopefully, I can take this good play to other courses as I begin to prepare for the end of summer golf and the beginning of golf in the fall. 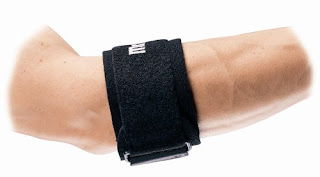 I also continued to wear the elbow brace on my left arm, per doctor's orders, to combat the onset of tendinitis. It seems to be working as I haven't felt as much discomfort following my rounds since starting to wear the brace.
Posted by The Muni Golfer at 10:12 PM 562 comments:

A Bad Walk at the Lane

After taking a week off from golf, it was time to tee it up again this weekend. One of my goals this year was to play each of the five Philadelphia public courses. Having already played three so far this year--Juniata, John F. Byrne and FDR--I headed to Roxborough for a round at Walnut Lane Golf Club. Designed by the legendary Alex Findlay, who also designed John F. Byrne, Walnut Lane winds up and down through the Wissahickon Valley part of Fairmount Park. 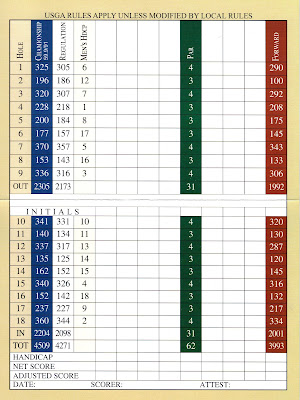 A short course at just under 4,300 yards and playing to a par of 62, Walnut Lane is anything from a pushover. Take the 218-yard Par 3 Fourth Hole for example. The hole plays downhill to a small green. Overhanging trees from the left and a drop off to the right of the green makes playing a fade impossible. The next hole, the Fifth, is a 184-yard Par 3 that plays from left to right across a deep valley. And the 134-yard Par 3 Eleventh Hole plays so uphill you cannot see the flagstick from the tee. With trees on the right and a huge slope on the left, a tee shot has a very opening to the green. 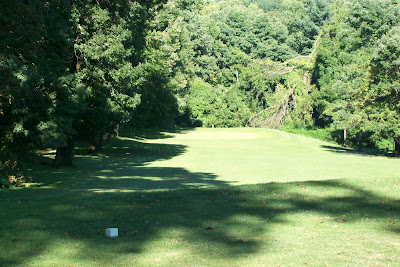 But what also makes Walnut Lane difficult is the conditions. While no one is expecting Augusta National, the boxes are chewed up and uneven. Fairways feature large bare areas devoid of grass, and when there is grass, it is thick and overgrown. The bunkers more like hardpan than sand. When I played on Saturday, the course had been aerated during the week, but they failed to mention it when I paid in the pro shop. Not that it would have stopped me from playing, but it would have been nice to know before I reached the first green. It made putting and chipping all the more difficult as the ball didn't want to roll far on the greens. You had to strike your putts firmer than usual to get them anywhere near the hole. The course was probably the worst I played this year, along with FDR.

As for my round, I played some good holes and some (very) bad holes. I had a quintuple bogey, three triple bogeys and two double bogeys on par 3s. I also had a quadruple bogey on a par 4. But I think a lot of it was more the conditions than my game. I only hit driver three times, but I crushed it in the fairway each time. I also managed to par the Eleventh Hole, which is one of my "Nightmare Nine" holes. 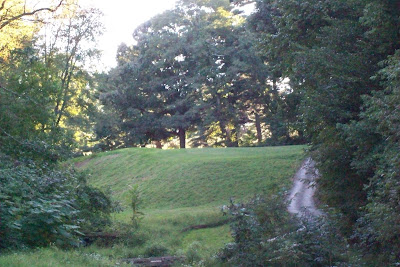 As per doctor's orders, I wore a brace on my left arm to guard against the mild tendinitis I have been experiencing. I also made sure to ice my elbow last night and I am not experiencing the discomfort today that I have been after recent past rounds. I will continue with this regiment into the future, until I am pain free.

Photos by The Muni Golfer

A Break in the Action

After playing four consecutive Sundays, my body told me that last weekend was a good time to take a weekend off and get some rest. It didn't hurt that the PGA Championship was on TV most of the weekend. While I missed physically being on the course, I still got my golf fix watching the best players in the world in the last major of the season.

One of the things my body was telling me was my left elbow was starting to hurt. Not so much when I was playing, because I always take an Aleve or Advil before my round, but after playing. I particularly noticed it when I would attempt to lift something with my left arm or would just pull out a club and waggle it. I already

had a doctor's appointment on Tuesday, so I mentioned it to him during my office visit. After explaining what I was feeling and an examination of my elbow, the doctor diagnosed the problem as mild tendinitis. He prescribed wearing a elbow brace when I play and icing the elbow after a round or whenever it is bothering me. He also suggested taking an anti-inflammatory if needed. I already have an elbow brace, so I will be wearing during all future rounds until the end of the season or the pain goes away.

This weekend off also provided my with an opportunity to compare this season to last. Ironically, at this point in both seasons I had played the same number of rounds: 12. During the those 12 rounds I took three strokes more this year than last, 1124-1127. My scoring round is also .3 strokes higher this year, 93.9 compared to 93.6 last season. Out of the 216 holes I have played, however, I have had two more holes at par or better than last season, 52-50. And I have made six birdies through 12 rounds this season, one more than I had through 12 rounds in 2011. My goal is to play at least 10 more rounds before the end of 2012, lower my scoring average, while making more birdies and pars.
Posted by The Muni Golfer at 11:32 PM 7 comments:

Fat Sunday at The Fairways

Sometimes, it's just one of those days. That was the case Sunday when I teed it up at The Fairways Golf & Country Club. Over the first four holes, I put a shot into a green-side bunker. I was in a bunker on six out of the 18 holes during the round. At the Second Hole, I hit my sand shot a little thin and flew the green, landing in the creek behind the green. I hit my iron shots fat and short all day. My chips were tentative and short. I made quadruple bogey, then triple bogey at back-to-back Par 3s. I played the seven Par 3s in 13 over par. And if that wasn't bad enough, I lipped out a four-foot birdie putt at the Par 3 Fourteenth Hole. Yes, it was just one of those days. I made a 49 on both the front and back nines. And this, just two weeks removed from shooting an 83 on the same course. Enough said.
Posted by The Muni Golfer at 10:10 PM 11 comments: