News has come out today that AT&T is the latest corporate sponsor to drop Tiger Woods because of his well documented off-course personal problems. AT&T will remain as the sponsor of the AT&T National on the PGA Tour, which will be played the next two years--2010 and 2011--at Aronimink Golf Club in Newtown Square. That tournament, which benefits the Tiger Woods Foundation, had been previously billed as being "hosted by Tiger Woods." Along with the news that AT&T is dropping its sponsorship of Woods, the PGA Tour announced that since the golfer was taking an "indefinite leave" from professional golf, Woods would not be serving as host the AT&T National in 2010. As of today, Tiger Woods' image is still prominent on the tournament's Website. As I wrote earlier, the tournament is still proceeding as it originally intended before the Tiger Woods mess began on Thanksgiving.
Posted by The Muni Golfer at 2:21 PM 10 comments:

As we count down the final hours of the first decade of the new millennium, it's time for me to look back at my 2009 golfing season. This past year, I played nearly 25 rounds, which included 5.67 practice rounds and one round that was washed out after three holes. I played on 17 different courses, including three for the first time: Mainland, Green Pond and Heritage Creek, although the Heritage was only three holes because of a huge downpour. 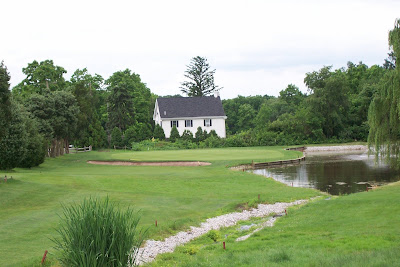 The Ninth Hole at Mainland
I played 447 total holes for the year. My stroke average was 95.4 per 18 holes, excluding the practice and incomplete rounds. I managed to make par or better on 64 of the 351 regulation holes for which I posted a score. That is just under 20 percent. The main reason for the low percentage I believe was because of my poor putting throughout the year. The most pars I recorded in a single round was six, which I did twice: June 19 at Mainland and Oct. 4 at Juniata. I did have four birdies this year: the Eighth Hole at Juniata on May 24, the Eighth Hole at Twining Valley on July 12, the Third Hole at Franklin D. Roosevelt on Aug. 15 and the Fourteenth Hole at Juniata on Oct. 4. 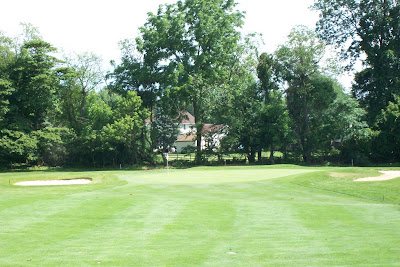 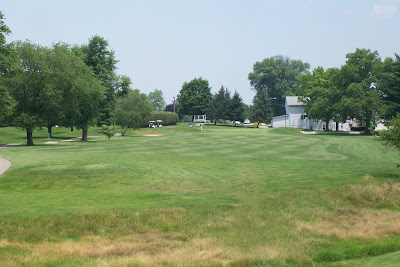 The Tenth Hole at Jeffersonville
I also managed to hit the Driving Range seven times this season, mostly in the early part of the Spring. I'm not sure how much that helped, although I do feel that is where I might have first developed my elbow soreness that hindered me through most of the season. But hopefully, I another eight weeks or so, I'll be back out on the practice tee getting ready for the 2010 season.
Photos by The Muni Golfer
Posted by The Muni Golfer at 1:15 PM 2 comments:

When I checked under the Christmas tree yesterday I found that Santa Claus had left me a box of Titleist NXT Tour golf balls. Actually, it was my in-laws who gave me the golf balls, but Santa must have whispered it to them since they were on my list the Jolly Old Elf. Thanks Santa! I can't wait until the spring gets here to use them.
Posted by The Muni Golfer at 9:34 PM 6 comments: 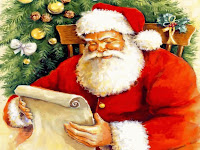 I've made my list and hopefully Santa has checked it twice. Hopefully tonight that Jolly Old Elf will leave a few of my golf-related Christmas list items under my tree. This year I asked Santa for a gift card to Dicks Sporting Goods or Golf Galaxy, some Titleist NXT golf balls and some Clif Bars for my golf bag. Although my golf game was more naughty than nice this past year, I think Santa might leave a couple of these items. As the Chipmunks sing: "We can hardly stand the wait, please Christmas don't be late!"
Posted by The Muni Golfer at 3:20 PM 6 comments:

Holiday Greetings from The Muni Golfer 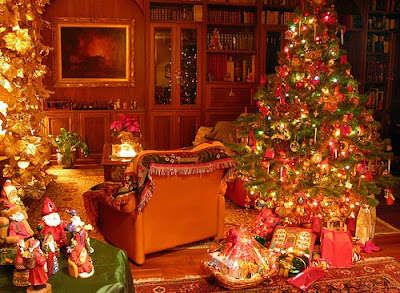 As we end the first decade on the 21st Century, I want to take this opportunity to wish everyone a very Happy and Safe Holiday Season. I also want to thank you for visiting this blog and following my adventures throughout the year! May you get everything on your holiday wish list and may 2010 be a year of fairways and greens, birdies and pars, and lower handicaps for all!
Posted by The Muni Golfer at 11:19 PM 5 comments:

Unless you have been hiding in a cave in Afghanistan with Osama bin Laden, you know by now the off-course problems of Eldrick "Tiger" Woods. Those problems, which I will not chronicle here, have led Tiger to take an "indefinite" leave from the PGA Tour. It is yet to be determined what impact his leave will have on the Tour, but one local place could be affected if Tiger doesn't return by the July 4th holiday. Aronimink Golf Club in Newtown Square is scheduled to host the AT&T National hosted by Tiger Woods, which benefits the Tiger Woods Foundation, June 28-July 4.

The tournament, which is referred to as "Tiger's tournament," announced that it was moving from its normal home at Congressional Country Club outside Washington, D.C. to Aronimink for 2010 and 2011. One of the draws to hosting the tournament is the presumption that Tiger will play. That assumption is now up in the air. Former Inquirer golf writer Joe Logan wrote recently on his Web site My Golf Philly that the tournament organizers are proceding as normal. It will be interesting to see what kind of attendance the tournament gets if Woods has not returned to playing when the event is held. Read Logan's entire story here.
Posted by The Muni Golfer at 10:35 PM 7 comments:

The End is Here...the Season's End 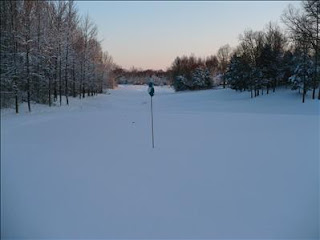 Sadly, yesterday's big snowstorm made me realize that the end of my 2009 golfing season has arrived. Although I have not been able to play since October, like many golfers, I kept hoping that there was one more round to play before the calendar flips over to 2010. But between a couple of colds, family commitments, the holidays and now the weather, I realize I've filled out my last scorecard for this year. Before the end of the year, I'll reflect back on how this season went and post my thoughts, as well as my statistics.
Posted by The Muni Golfer at 2:26 PM 7 comments: