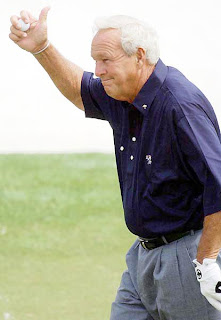 As the calendar moves from March to April, the ground begins to dry out from the winter's snow, and the temperatures start to rise about 50 degrees, it's easy to realize it's the beginning of another golf season. And just as we make sure our equipment is in good working order and we begin to knock the rust off our game, we should also take some time to review a few simple rules of golf etiquette that will make a round of golf more enjoyable for us and our playing partners.

A few years ago, Golf Digest offered 10 rules for good golf etiquette by The King, Arnold Palmer. I believe that golf courses should reprint this article and make each player read it before teeing off during the first month of the season. Since that isn't likely to happen, I figured I would give you the 10 rules with condensed commentary by Palmer.

I. Don't be the slowest player

"Remember the old staples of getting around in good time: Play 'ready golf' (hit when ready, even if you aren't away) until you reach the green, be prepared to play when it's your turn on the tee and green, and never search for a lost ball for more than five minutes."

II. Keep your temper under control

"Throwing clubs, sulking and barking profanity make everyone uneasy. We all have our moments of frustration, but the trick is to vent in an inoffensive way. For example, I often follow a bad hole by hitting the next tee shot a little harder -- for better or worse"

"Because time is our most valuable commodity, there are few good reasons for breaking a golf date. Deciding last-minute to clean the garage on Saturday, or getting a call that the auto-repair shop can move up your appointment by a day, just doesn't cut it. Always make your tee times, and show up for your lesson with the pro a little early. Social functions are no exception."

IV. Repair the ground you play on

"I have a penknife that's my pet tool for fixing ball marks, but a tee or one of those two-pronged devices is fine. As for divots, replace them or use the seed mix packed on the side of your cart. Rake bunkers like you mean it. Ever notice that the worse the bunker shot, the poorer the job a guy does raking the sand? Make the area nice and smooth -- don't leave deep furrows from the rake. Before you exit the bunker, ask yourself, Would I be upset if I had to play from that spot?"

V. Be a silent partner

"Stand still from the time a player sets himself until the ball has left the club. Even with the advent of spikeless shoes, the etiquette rule of never walking in someone's line of play on the putting green is an absolute. The area around the hole in particular is sacred ground. The first thing to note when you walk onto a green is the location of every ball in your group, then steer clear of their lines to the hole. Know where to stand and when to keep quiet. Position yourself directly across or at a diagonal from a player setting up. Never stand on the line of play, either beyond the hole or directly behind the ball. When a player is about to hit a shot, think of the fairway as a cathedral, the green a library."

"Your goal when driving a cart should be to leave no trace you were there. Because we tend to look where we're going and not where we've been, it's easy to damage the turf and not realize it. Avoid wet areas and spots that are getting beaten up from traffic. Golfers tend to play 'follow the leader' and drive in single file out to the fairway before branching off. It's usually better to 'scatter' -- everyone take a different route -- so cart traffic is spread out."

"From Bobby Jones and Walter Hagen to Ben Hogan and Sam Snead to Tiger Woods and Phil Mickelson, the best players have been meticulous about their appearance. Their clothing has been sharp, and not one of them has shown up on the first tee with his cap backward, mud caked on his shoes, or his shirttail hanging out. Your appearance speaks volumes about you as a person, and the neatly appointed golfer, like a businessman or someone headed to church, gives the impression he thinks the golf course and the people there are special."

VIII. Turn off the cell phone

"If I had my way, cell phones would be turned off at all times on the course...but do whatever you have to do to keep it quiet. And if you absolutely have to make a call, move away from the other players. And keep the call so brief that they don't even know you made it."

IX. Lend a hand when you can

"It's easy to help out your fellow players, if you just pay attention. One obvious way is looking for lost balls -- better yet, watching errant shots so they don't turn into lost balls. Pick up that extra club left on the fringe or the headcover dropped next to the tee, and return it to its owner after saying, "Nice shot!" And if you see a cart out of position or a provisional ball that needs picking up, don't just walk by."

"There are a hundred bits of etiquette I haven't mentioned, like laying the flagstick down carefully, tamping down spike marks when you're walking off a green, letting faster groups play through, and so on. All of these things are learned by observing, with a sharp eye and a considerate heart. Just know that golf has a way of returning favors, and every piece of etiquette you practice will be repaid tenfold."

We never want to have our round of golf spoiled by someone who showed a lack of golfing etiquette on the course. But let's make sure we don't spoil someone else's round because we failed to be courteous as well. Let's all make good golf etiquette one of our goal's for 2010.
Posted by The Muni Golfer at 7:26 PM No comments: 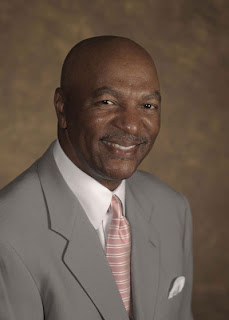 Pete McDaniel, who covers Tiger Woods for Golf Digest and has co-authored books with the world’s number one golfer and his late father Earl, will give a free public talk at Temple University on Thursday evening, April 1, 6 p.m. on the 2nd Floor of the Entertainment and Community Education Center, 1509 Cecil B. Moore Ave.

He was originally scheduled to speak at Temple in February, but the event was canceled because of the weather.

In his talk, McDaniel will discuss the historic struggles that have been faced by black golfers. In addition, he will also show “Uneven Lies,” a documentary produced last year by The Golf Channel. Narrated by Samuel L. Jackson, the hour-long documentary is based on McDaniel’s book, “Uneven Lies: The Heroic Story of African Americans in Golf.”

In addition to authoring “Uneven Lies,” McDaniel has also co-authored two best-selling books: “Training a Tiger--The Official Book on How to Be the Best” with Tiger Woods, and “Training a Tiger--A Father's Guide to Raising a Winner in Both Golf and Life” with Earl Woods, Tiger's late father.

The event, which happens one week before The Masters, golf’s first major championship of the year and the return of Woods to tournament play, is being sponsored by Temple’s Office of Community Relations.

Back to the Mat 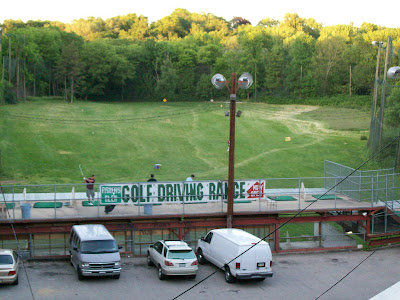 Last night I made my second trip to the practice range as I continue to try and shake the winter's rust off my swing and my get my game ready to take to the course. I again selected a small bucket of balls and took up my customary spot on the lower level.

This time I brought my Momentus Power Hitter Driver with me. I wasn't able to use the Power Hitter much last season because of the forearm/elbows strain that hindered me through most of the season. I warmed up with some stretching, then swinging the weighted Driver. I then hit 10 lob wedges. Feeling sufficiently warmed up, I teed it up with the Power Hitter for 10 balls, before hitting 10 balls with my regular Driver, a TaylorMade Tour Burner. I then 10 3-Woods and concluded by hitting my last five balls off the mat with my 5-Wood.

Overall, I felt good about the way I hit the ball, making solid contact about 80 percent of the time. I also worked on my pre-shot routine, swing thoughts and tempo. I tried to focus more on these aspects than on the results of my shots, but overall, I think I hit the ball really well for the second practice session.

I think I might go to Juniata Golf Course and work on putting and chipping for my next practice session. I'm shooting for early April to play my first official practice round on the golf course.
Posted by The Muni Golfer at 11:53 PM 8 comments:

Getting Back into the Swing

The arrival of daylight savings time last weekend has brought lasting twilight and warmer temperatures. It has also heralded the arrival of the first venture to the practice range. Tonight a grabbed my clubs when I got home from work and headed to Fishers Glen, where I took my usual spot on the lower level. Equipped with a small bucket of balls--I didn't want to overdue on my first practice time of the year--I set my task at stretching, working on a pre-shot routine, ingraining the swing thoughts I outlined in my previous post and generally, just hitting some golf balls to begin knocking the winter's rust off my game. 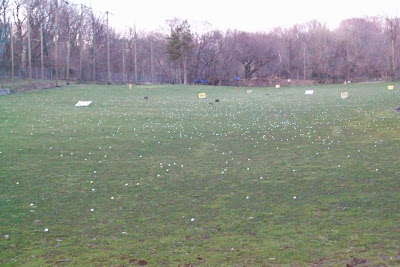 I had laid out my alignment sticks to help with my aim and I went through a pre-shot routine between each shot. this consisted and standing 3-5 yards behind the ball and taking one or two practice swings, then moving into the ball, setting the club to my target, taking my stance, waggling the club once or twice then swinging. I wasn't concerned as much about results as I was about making good contact, which I did about 75 percent of the time. Not bad for the first time hitting balls since last October. 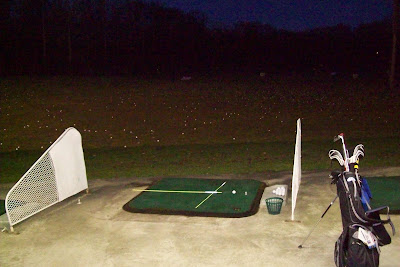 Darkness covers the practice range
Except for the lights above the hitting area, the range was completely dark as I hit my last shots, but I left the range feeling good about my first practice and I can't wait until I get back to the practice range for another session.
Posted by The Muni Golfer at 10:37 PM 4 comments:

A few years ago, Golf Digest magazine ran a monthly feature in which Tour Pros revealed their swing thoughts. The premise was that your swing thoughts should fit on a 4X6 card. The idea is, the fewer swing thoughts you have, the simpler you keep your swing. Any more and you would be complicating things. As I begin to focus on my preparations for the coming golf season, I have jotted down my swing thoughts on the 4X6 card below. 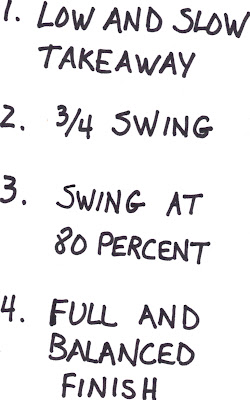