At a meeting last Wednesday, the members of Aronimink GolfClub in Newtown Square voted to host the PGA Tour's AT&T National hosted by Tiger Woods in 2010 and 2011. The tournament, which benefits the Tiger Woods Foundation, is currently played at Congressional Country Club in Bethesda, Md., but has to temporarily relocate after 2009 because Congressional is hosting the 2011 U.S. Open. AT&T National officials were attracted to Aronimink because it is a Donald Ross designed course and has previously hosted the 1962 PGA Championship and the 2003 Senior PGA Championship. This will mark the first time the PGA Tour has played in the Philadelphia region since the 2000 and 2002 Pennsylvania Classic was held at Waynesborough Country Club in Paoli. It will also be the first time Tiger Woods has teed it up in the area. The 2010 AT&T National will be held June 28-July 4.
Posted by The Muni Golfer at 3:19 PM 4 comments:

Tough to Score at Talamore 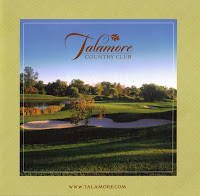 I was invited to be a guest for a round at Talamore Country Club, a private golf club and community located in Ambler, Pa. Ranked among the top 25 in the state of Pennsylvania in 1999, the course was rated the 11th "Best New Private Course" by Golf Digest when the club opened in 1995. Although Talamore is only 13 years old, the property has a rich golf history. Several golf courses have called the parcel of land home, included Talamore's predecessor, Oak Terrace, which once hosted an exhibition match featuring legendary golfer Sam Snead on June 11, 1961. Gene Sarazen was also scheduled to participate in that exhibition, but had to withdraw after injuring his back just a few days before the match. 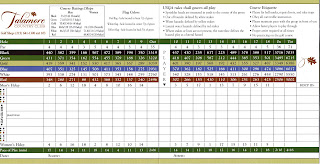 Talamore Country Club Scorecard
Talamore offers players the full range of amenities -- from locker rooms, to a driving range with grass tees, to carts with a course GPS system. They even have a four-hole practice course. After meeting up with my playing partners, we headed to the driving range to warm up. What a delight to hit off of real grass. After hitting a small bag of balls, it was off to the first tee. Fall had definitely arrived on this day too. After an Indian Summer, temperatures were in the mid-50s to low 60s, with a cool breeze blowing around the course. 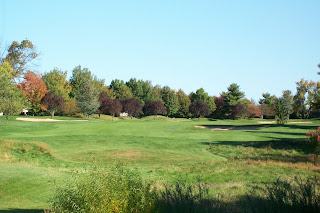 The 1st Hole at Talamore
Standing on the first tee, Talamore looks a lot like most modern, well-maintained golf courses. But it was here also that my host issued the warning: Talamore does not play easy. The course has a lot of bunkers and hazards, forced carries from the tees, ponds and wetlands, fairways that slope in such ways that shots often run off into the rough or hazards, and greens that are extremely undulating and lightning quick. I got an early indication that I might be in for an interesting round when, while waiting for my host and other partner to arrive, I used the putting green. I had never before seen a multi-tiered putting green that had so much slope, break and speed. Although the course only a little over 5500 yards from the white tees, its rating and slope of 66.3/125 tells you how difficult the course plays. 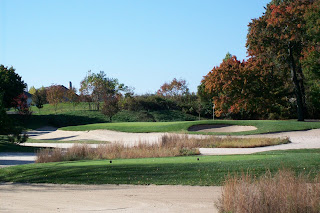 The Par 3 4th Hole is well guarded by sand
Starting 6-8-8 on the first three holes, with two lost balls at the Par 4 2nd Hole, didn't get my round off to a very good start. Compounding my problems was a swing that was causing me to pull all my shots extremely left, both off the tee and from the fairway/rough. I was hitting a lot of chip-outs or recovery shots back to the fairway, then finding the greens hard to hold on chips and pitches because of their speed and the fact that most of them run off on all sides. And when I did get it on the green, a three-putt wasn't hard to do. I did manage to make a par at the 8th Hole, a 148 yard Par 3 that plays over wetlands to a green protected by bunkers and a false front. A four-putt at the next hole, after hitting the green in two from a really bad lie, left me a 54 on the front nine. 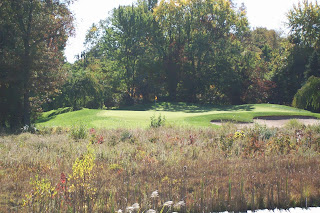 The 8th Hole, another Par 3
Things didn't get off to a much better start on the back nine, where one of my partners hit my ball from the fairway, causing me to hit a wrong ball and take a two-stroke penalty. We both swear we saw my tee shot roll past his from the tee box! After that, I did settle down and scrambled my way to a 47 on the back nine, including pars at Holes 15 and 16, both Par 4s. My 18 hole total of 101 was the first time I've failed to break 100 this year, but after my horrendous start, the fact that I was able to play a more respectable back nine gave me some comfort. And my host told me to take heart, because after six years of playing the course, he still can't figure out the greens. 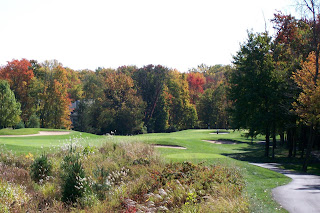 The 11th Hole, a downhill Par 4
Talamore is an outstanding golf course and an outstanding experience. But if you do get to play there, be prepared to bring your 'A' game, place a premium on accuracy, accept that bad breaks are going to happen, and don't get frustrated by three-putting. 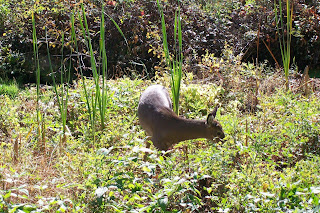 A deer grazes on the 12th Hole 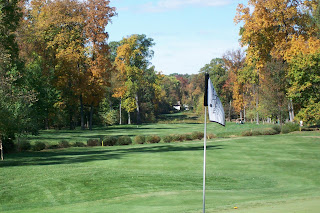 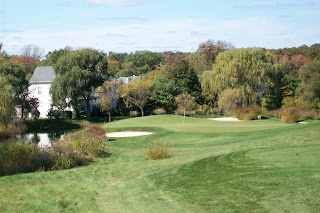 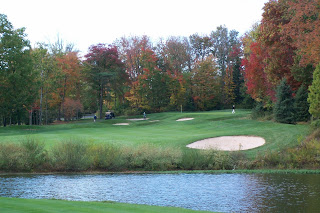 Fall-ing Back to Golf at John F. Byrne

After taking a few weeks off, mainly to watch the Phillies playoff drive, the Philadelphia Eagles and give my body a chance to refresh, I decided to start my fall season with a round at John F. Byrne Golf Club. Formerly Holmesburg Country Club, Byrne Golf Club was acquired by the City of Philadelphia in the late 1960s. Set in a valley that sees the Torresdale Creek wind its way through the course, the Alex Findley layout is now being managed for the City by Billy Casper Golf. The weather felt more like summer than fall, with sunny skies and temperatures in the low 80s. I also wanted to knock some of the rust off my game as I am scheduled to play a round at Talamore Country Club, a private course in Ambler Pa., this coming Friday. This was the second round I played with my new Sun Mountain Swift golf bag and at a hilly course like Byrne, this bag really earns its reputation. After 18 holes, it still felt extremely light on my shoulders and back, even though I am carrying almost as much as I was in my Sun Mountain 3.5L bag. This bag has been a welcomed relief and if you walk the course like I do, I highly recommend this bag. 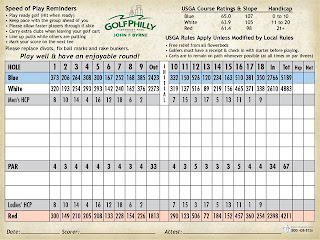 John F. Bryne Scorecard
I wasn't sure what to expect out of my swing after the layoff, and it wasn't too bad, but I was really happy with my course management. I posted three pars on both the front and back nines -- at Holes #5, 7, 8, 11, 13 and 15--two Par 4s and four Par 3s. In addition, I managed to play Byrne's two Par 5s, Holes 12 and 16, in a respectable two over par. My putting was also a bright spot, although the greens were exceptionally slow. My only real problems came at the Par 4 4th Hole, a very tight driving hole where I took a 9, and the uphill Par 4 18th Hole, where a tee shot that found the creek led to an 8. 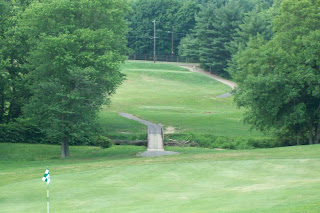 The tight Par 4 4th Hole, which requires a precise tee
shot through a narrow opening over the creek
Overall, Byrne was in pretty good shape for this time of year. The tee boxes were a little chewed up, but respectable. The fairways were in good shape, with few bad lies, and the greens were slow, but in decent shape. Because I teed off only a few hours before the Eagles kicked off in San Francisco, the course was fairly empty. I played most of the front nine with Chris, a freshman at St. Joseph's Prep High School, who told me he had tried out for the golf team this fall, but failed to make the cut. He had a pretty good swing, but I encouraged him to work on his short game and his course management, and wished him luck when trying again next fall.
Photo by The Muni Golfer
Posted by The Muni Golfer at 9:18 PM No comments:

Reports in today's Philadelphia Inquirer and Daily News indicate that the AT&T National hosted by Tiger Woods may be held at Aronimink Golf Club, just outside Philadelphia, in 2010 and 2011. The tournament, which benefits the Tiger Woods Foundation, is currently played at Congressional Country Club in Bethesda, Md., but that course will be undergoing renovations after next year's tournament in preparation for hosting the U.S. Open in 2011. Aronimonk, which was designed by the legendary Donald Ross, has hosted the 1962 PGA Championship, which was won by Gary Player, and the 2003 Senior PGA Championship. The members of Aronimink are scheduled to vote on hosting the AT&T National after an Oct. 15 town hall-style meeting with tournament officials. If the course, located in Newtown Square, accepts hosting the tournament, it will mark the first time the world's number one player will tee it up in the Philadelphia area.
Posted by The Muni Golfer at 9:53 PM 3 comments: